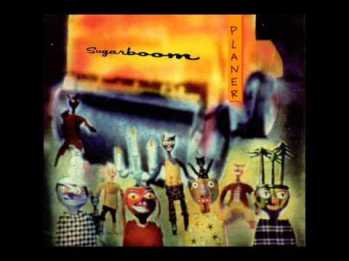 You know how people say I’m with the band? Well, I lived with a band back in the early nineties. I lived there for the birth of an album. Sugarboom practiced Monday and Tuesday nights in our basement.  Anne, my roommate, was the bassist and rented the house partially because it was a great space for Sugarboom to practice in.

At the time Seattle sound was monstrously popular. And I barely noticed. I was into the local poetry scene, into seeing free movies because I worked at the Movie House, into seeing local bands. But I disliked seeing three guitar bands in a row. I wanted to see variety shows or cabarets. I wanted to see coed bands. I loved male and female singing duos like X or the Pixies.

So not the Seattle sound.

I ignored them and listened to X, the Pixies or defiantly pop bands like Crowded House. Ha! That would show them!  I didn’t hide that I loved Crowded House.

One night my friend Marina and I went to the Portland club Satyricon. It was THE place to see bands and hang out. We used to go there several nights a month. We had seen a lot of great alternative rock and punk rock bands there. We heard this great fast dance-able beat coming from the stage area. We raced in and started dancing immediately.

I don’t remember which Sugarboom song they were playing but it was probably from their first or second cassette. We hung around dancing and drinking. Marina and I loved to dance. I ended up buying the cassette.

Like I said they practiced Monday and Tuesdays. I read poetry Tuesday nights at Cafe Lena. I would hear the beginning of their practice and that was my cue to head down to the open mike at Lena’s. They were being creative and I was being creative. It felt good.

They each individually practiced on their own too.  I have a lot of respect for how hard bands work to create an album’s worth of songs.  It seems tremendous to me.  Sugarboom created the album Planer while I lived there.  Greg Sage produced it. I love that album.  It has an atmospheric sound with lovely vocals.  There’s a great blend of poignant and fun songs. The album is also the ticket to my 28-year-old self.  When I listen to it I have fun but a heavy blanket of melancholy can come over me if I let it.  I was extremely sad then and coming out of depression.  I was trying to figure out who I was and where I wanted to be.  So I moved to Philadelphia and went to Drexel University to study for a Masters of Library Science.

Isn’t it amazing how music can take you down memory lane?  It’s up to us to find our way back and redefine the music so we can listen again without the fog of memory if we choose.

Dress is of my favorite songs by Sugarboom. Because I still want to go dancing. How about you?